If you keep up with discussions about professional Fortnite players, you'll probably start seeing a lot of talk about Fortnite rotations.

While this isn't necessarily something the average player thinks about, it's a key part of getting better at the game.

If you want to start to increase your kill count and get more Victory Royales, you'll definitely need to start thinking about your in-game rotation.

What is a Fortnite Rotation?

Rotations aren't something unique to Fortnite; they're used in almost every game.

Rotations are the order in which you perform certain actions to get the highest possible rewards - in an MMO, it's usually an order of character actions, but it can also be an order of skill usage in an Arena Shooter or even build order in a Real Time Strategy game. 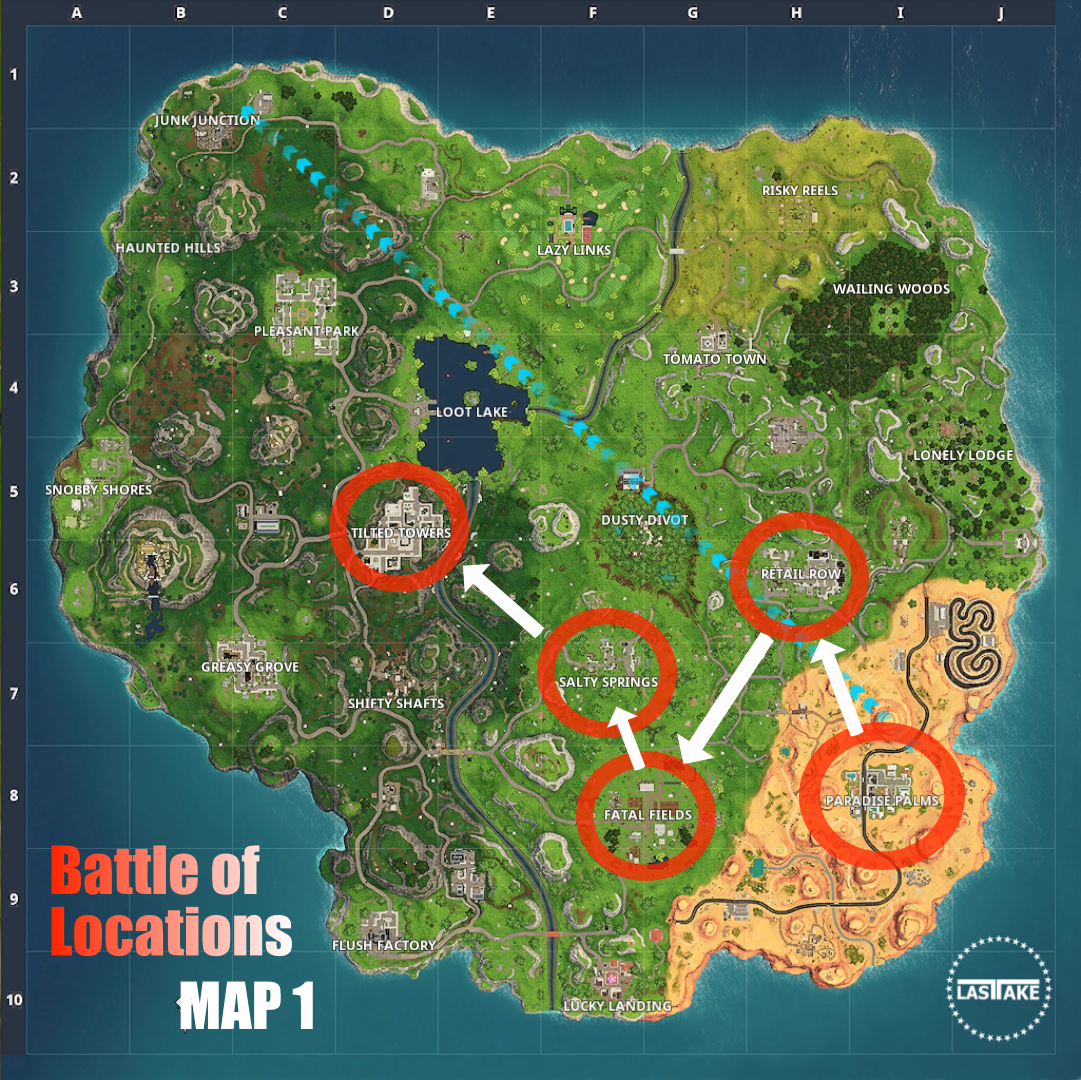 Having a solid fornite rotation is usually a key part of being an elite-level player. Here's an example of a rotation you might plan out at the start of a game.

You'll have to adapt as the storm forms and the circle moves but it's good to have a general idea of where you want to go once you drop.

While there's probably an argument to be made for the order in which you might want to build or use certain items, Fortnite's rotation actually concerns your ability to find the most potential kills.

When the vast majority of players talk about rotations in Fortnite, they're talking about the order in which you hit different points on the map so that you can get the most kills and so that you have a better chance of getting a Victory Royale.

Why You Need to Rotate

As you already know, there aren't exactly many skills to cycle through in Fortnite. On the surface it looks like building and shooting are the only skills you need to master.

But dig deeper and you'll find out that having solid rotations is what separates the bots from the pros. There are plenty of good reasons to get your rotation down in Fortnite.

The big one, though, actually has a lot to do with making the game more fun.
If you're not following the right fornite rotation, you're going to spend the majority of your match stumbling around and hoping to find other players.

Not only will this keep your kill count low and hurt the amount of XP that you earn, but it can leave you resource-poor if you manage to get into the final circle of the map.

Before we take a look at the primary fornite rotation pattern, it's very important to stop and note that the best rotations do tend to change over time.

If a pro starts having success by landing in a new area or spending their time in a new map zone, you're going to have to follow the leader.

Likewise, any major changes to the map or to loot drops will probably end up changing the rotation timing significantly.

For the moment, though, this rotation guide will allow you to get a good grasp on how to follow the flow of the game until it reaches the endgame.

Step One: Determine Your Play Style

Before you figure out your rotation, you need to figure out how you're going to play your match.

This will allow you to gather up the basic resources and to work on your game-plan as the numbers drop.

It's also a really good idea to stop and think about what the weekly challenges are.

If there's a weekly challenge that involves a specific zone or going after chests, the rotation listed here is going to go out the window.

Instead, you want to go where the bulk of the server is dropping so that you can quickly get kills and check off those goals.

Rotations always differ due to the bus route.

Active players are almost always going to drop in a zone that's closer to the bus, so go there if you want to get a lot of early kills.

As a rule, though, the zone that's closest to the bus's initial departure point is going to end up being the site of most of the mayhem.

The vast majority of players are going to tell you to make Tilted Towers (or its equivalent) the first major stop in your rotation.

For the most part, this makes sense - it's a good place to get kills, it's full of resources and drops, and it's close enough to many other good locations that you can move on quickly.

With that said, going immediately to Tilted is going to put your right in the heart of a firefight early on. Only go here if you're really ready to be competitive.

This also depends on when you'll be arriving. If you show up 5 minutes after the bus has dropped, most players will have already been killed and any players left at Tilted are probably going to be fully geared up and ready for a fight.

I prefer to avoid Tilted unless I can get there quickly like when I land at Loot Lake or another place really close to Tilted.

If you really want to drop Tilted, check this video out for some good tips.

Plan your route according to how the circle will shrink and where you think it will force others to go.

With a little planning, you can lie in wait for other players.

A good Fornite rotation is a rotation that's going to help you get the most XP and give you the best chance of winning.

Drop where you think you can get the best start, head to a melee when you're ready to fight, and learn where others are going so you can hunt them down.

Try out different rotations as you play the game to find something that works for your play style and that makes you feel comfortable.

In time, you'll have a rotation that really suits the way you play.