If you've ever had your finger slip or a keystroke not register that led to your early death in Fortnite, you know how important a good keyboard is.

And the one of the best keyboards you can get for Fortnite is the Corsair K70 LUX.

It's one of the best models Corsair has to offer, but how does it stack up compared to some of its premium counterparts?

A quick rundown of the main features of Corsair K70 LUX

If I told you that a certain keyboard measures in at 18.6 x 8.3 x 3.3 inches, will your mind get blown? Probably not, and that’s completely understandable.

At the very most, some of you might bust out the old measuring tape to see how much space you have on your desk, only to shake your head in disappointment, realizing that you need to buy a new one.

Ultimately, it goes without saying that this keyboard is full-sized, with all 104 keys included. In case you were wondering, you can choose between Cherry MX RGB Red, Blue or Brown switches, ranging from soft to firm feel, whichever you prefer.

When it comes to weight, this thing is substantial.

Coming in at 2.65 pounds, it’s not the heaviest keyboard I’ve ever seen, but it’s chunky enough to survive a good beating after your character dies in an annoying fashion.

All that weight is also a clear indication of the build quality, which is supreme. 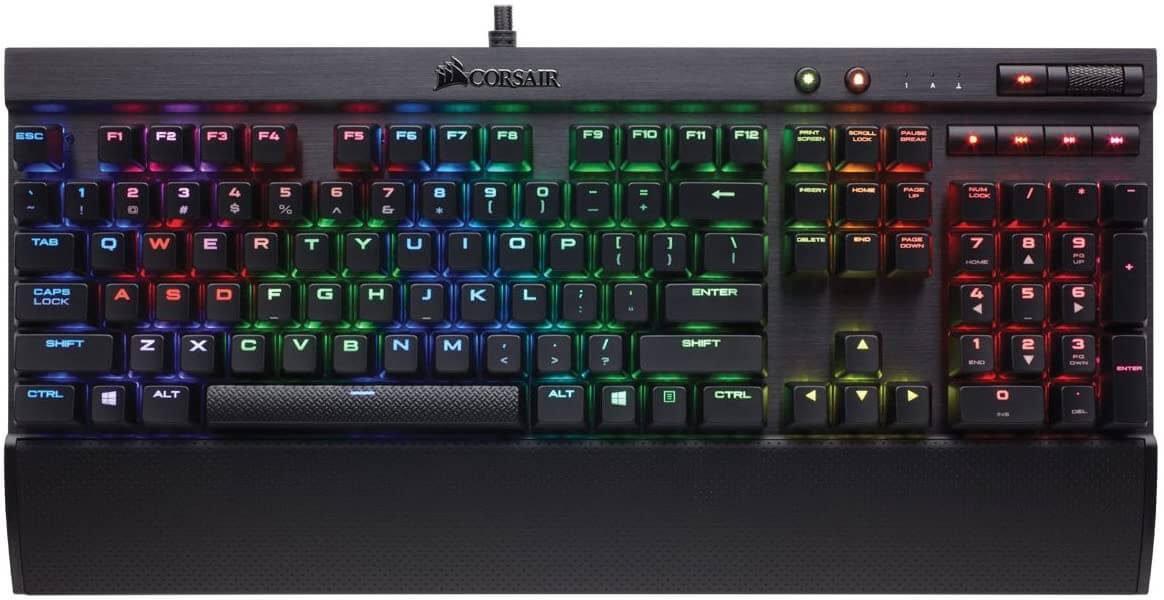 The brushed aluminum not only looks good, but also gives a guarantee that this keyboard is built to last. Unfortunately, if you ever need to repair it, you’ll first have to deal with 20 screws holding it together. That sounds like a frustrating afternoon.

Even after you pluck out each and every one of these screws, you’ll quickly find out that two more can be found in there, hidden from plain sight. There’s another problem here.

These things are covered by the logo plate and the volume roller cover, both of which you’ll have to yank out in order to access the screws. Once you do that, you won’t be able to take them back. 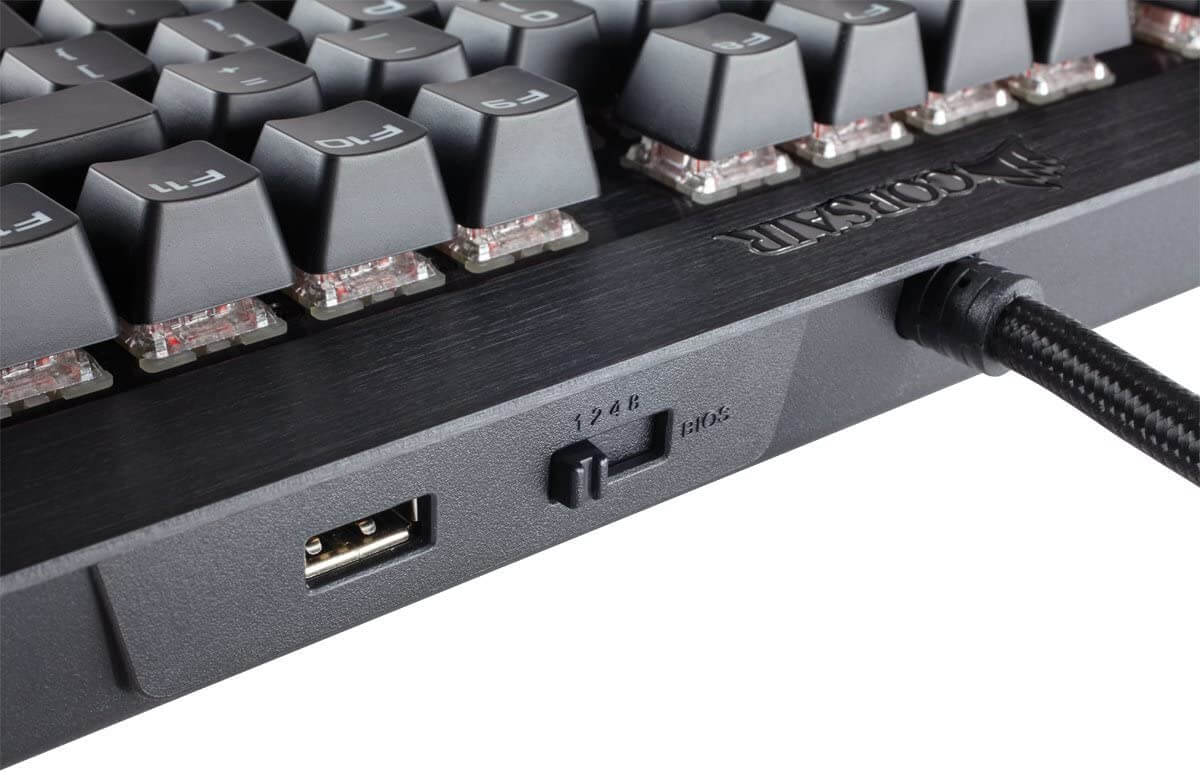 It seems kinda illogical to place these screws in such a manner, especially in the case of this keyboard, which seems ultra durable, but it is what it is.

Naturally, the first thing that comes to mind is probably the crazy color scheme. However, being that I’ll spend plenty of time talking about it, let’s just leave it for now.

Instead, I would like to point out that K70 LUX comes wrapped up in a neat aluminum case that’s substantially shinier that you might think, just looking at the pictures. I know that I was caught by surprise when I first saw it, as I somehow assumed that it would be almost glossy from a few images I previously memorized.

What also stands out is the spacebar, which has a neat texture to it. I wasn’t a huge fan of this move at first, but it grew on me as time moved on.

On the other hand, keycaps are almost entirely smooth, which comes with its problems.

Most notably, while I don’t necessarily have Cheeto fingers, I had no problems with getting this thing dirty as hell.

Seriously, after just a few hours of gaming, or even worse, typing, it looked like it hadn’t been cleaned for a whole month. Not to mention that it’s not entirely practical to have such a slippery keyboard, as you can easily slide your finger across multiple keys, when you don’t necessarily wish to do so.

Luckily, people from Corsair figured that this feature might become a problem to some individuals, so they also put out gaming keys, which are more textured, and even slightly slanted, keeping your fingers right where you want them. 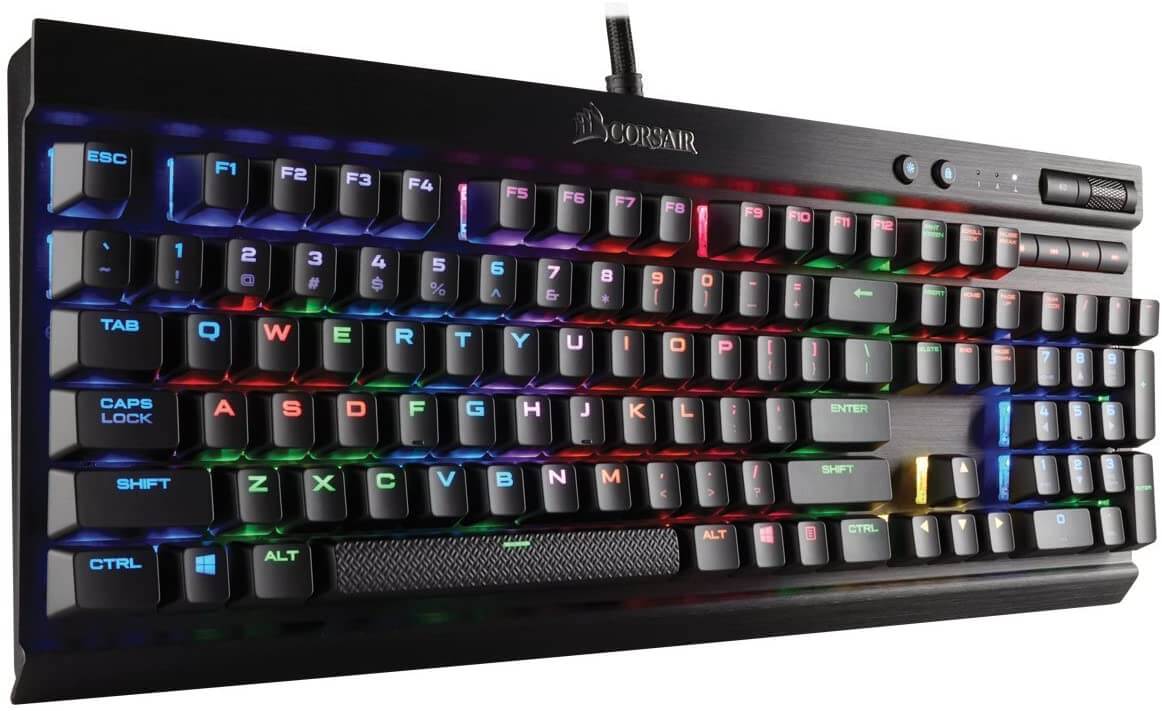 No matter which version you choose, the keycaps are 1.1mm thick, which is enough for a smooth typewriting session, but I’ve seen better, I’m not gonna lie.

If you are used to typing full force, holding no punches back, as my friend likes to say, this keyboard can be rather loud. You won’t wake up your neighbors or anything, but it’s definitely not on the silent end of things either.

Finally, we come to the part you’ve all been waiting for, the crazy color schemes!

The awesome Corsair K70 LUX mostly stands out due to its RGB lighting. Not only that you can customize each individual key, you can also add all sorts of crazy patterns and effects.

You might think that this is a bit much, but if you pick the right color, which goes great with the black keyboard and aluminum top plate, you will create a spectacle underneath your fingertips. Truth be told, no matter which pattern you choose, I only have one simple advice for you – don’t get too wild, or your eyes will suffer.

While RGB offers millions of options, and you should definitely try out as many as you can, chances are that you’ll simply pick that one that looks the best, without being too dramatic.

All of these customizable RGB schemes would be nothing without a quality software which allows you to customize the look of your keyboard. In this case, the K70 LUX comes with Corsair Utility Engine 2, which is incredibly simple to use.

However, the first thing that you’ll notice is the size of the file, which unpacks to unprecedented 160MB. You might think that would be a lot for a simple keyboard software, and well, you’d be right.

Unfortunately, you’ll just have to learn how to live with it. I tried shutting it off, but as soon as you do that, all of your background color gets automatically turned off. 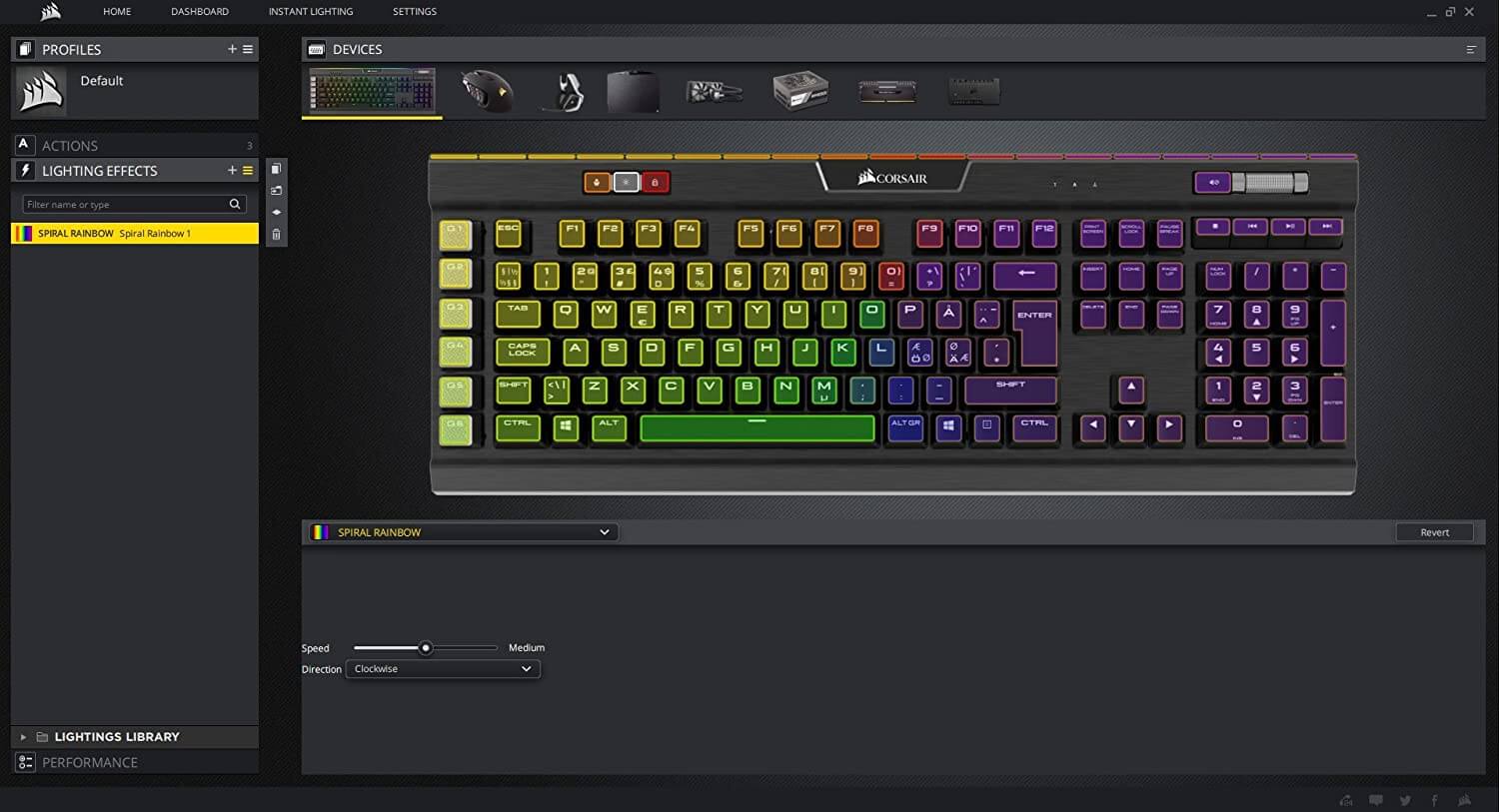 To make the situation even worse, plenty of users noticed that the drivers on their devices don’t match, thus rendering this keyboard useless on certain Windows systems. Luckily, it was soon discovered that the problems occurred due to a system update, and everything was sorted out easily and pain free.

In total, this is a far cry from an ideal software, but it does look rather decent, and it’s simple to use, so I’d be willing to give it a pass. Sure, it will eat up some of your memory, and it might not work all the time, but I’ve definitely seen worse.

I know that doesn’t really say much, but I think that the problems have been a bit overblown out of proportions, and that you’ll learn how to deal with it in no time.

Considering the price tag, I think that it’s fair to mention some things here as well.

First of all, it’s downright insane that this keyboard cannot be disassembled without damage. That’s unacceptable in my book.

That is especially true when you consider the fact that it’s not waterproof either. Spill your morning coffee over it, and you’ll have a huge problem on your hands.

Undoubtedly, the biggest issue can be found with the cumbersome software which comes with it. The sheer size of the program is intimidating, and it takes up a lot of memory.

Once you actually give it a chance, it’s not too terrible, but it definitely can be improved, there’s no reason for it to be this huge. I guess that’s something Corsair will have to do with their next products.

This thing doesn’t look absolutely fantastic. The aircraft-grade aluminum frame and the sleek keys make this keyboard really pretty to look at.

Still, the thing that separates it the most is the RGB backlighting, which can look tremendous, if you implement the right color scheme. You can even choose between one of many crazy patterns, which is a nice touch.

Furthermore, it should serve you for a long time, as it was built from a high-quality components that are built to last. Especially dedicated multimedia commands and a comfortable wrist rest complete the picture of a good product.

I won’t get too far into the font-related issues. I’m actually OK with it, although I’ve heard several people protesting about it, claiming that it was ugly. I’ll let you be the judge of that.

Is it perfect? No. Will it look awesome, and serve you for years to come? Yes and yes. You decide if that’s enough to match your standards.